Pretty Girl!!
Sorry we’ve been MIA lately around Blogville.  I’m kind of blogged out for right now, so I might take a break and just post here and there.  I’ll try to keep up with your blogs but can’t promise anything.  Riley’s Aunt Baddy (my sister) just had some minor surgery yesterday, so I’ve been taking care of her.  She is doing well, so no worries.  In other exciting/slightly scary news…I’m getting braces on my teeth on Monday!  Yes, I’m 25, but it’s never too late to improve your smile!!  🙂

The photographer posted a link to her blog on her Facebook page this afternoon.  She had some nice things to say about Riley!  Here’s the link to the blog post on Amy Jenkins Photography Blog.  Check it out!

The photographer, Amy, was great!  She didn’t even freak out when Riley came towards her when she had her camera to her face (she called Riley’s name and she had a treat, so I can’t really blame Riley for going over to her) or when Riley went exploring in her studio for a minute or two.

Yes, I know…another treat post?  Yep.  We had the fortunate luck to have received some treats for free (seemingly by accident) from The Organic Hound Company because I had ordered treats through Blissmo (a Groupon type service) a few weeks earlier.

I got them in the mail and hadn’t remembered ordering any.  There was no invoice in with the treats, and I wondered if someone had ordered them for us.  Being the guilty person I am, I scoured through my finances and didn’t see any charges for the treats.  So then I contacted the good people at The Organic Hound to see if they knew who had ordered them.  I received a prompt reply and through a couple of e-mails (and a phone call on The Organic Hound’s part), we were able to figure out that somehow the names from the earlier Blissmo order (for The Barker’s Dozen) had gotten on the list for The Organic Hound’s treats.

They said to keep the treats, they were free (yay!), and Riley has been enjoying them!  They sent three boxes (one of each of their three varieties: Peanut Butter Flax, Pumpkin Ginger, and Beef Heart).  I opened the Pumpkin Ginger treats and Riley LOVES them!  I took them with us to get her pictures made on the 6th, and they definitely captured her attention…in fact, she drooled a little bit…haha!

Anyway, The Organic Hound has great customer service and I was highly impressed with them and their treats! 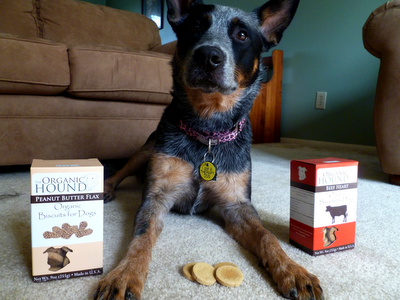 Peanut Butter Flax on the left, Beef Heart on the right, and the Pumpkin Ginger treats in the middle (I had already recycled the box).

The treats are so good that Riley lost all sense of etiquette and stuck her nose right down into the treat container!